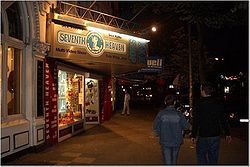 The Reeperbahn, a street in the St. Pauli district of Hamburg, is one of the main centers of Hamburg’s nightlife and also the city’s red-light district. A police station, the Davidwache is a famous landmark of this street. During certain times of the day, Street prostitution becomes legal on Davidstraße. Restaurants, night clubs, discotheques and bars are found all along this street. Strip clubs, sex shops, brothels, a sex museum etc form a part to of this street.

A musical theatre, The Operettenhaus, which plays musicals like Andrew Lloyd Webber’s Cats, Mamma Mia!, an ABBA-musical and “Ich war noch niemals in New York” is also found here. Other theatres like – St. Pauli Theater, Imperial Theater, Schmidts Tivoli – are also found at the Reeperbahn. Several bars, clubs and a Catholic church are found at The Große Freiheit, a cross street on the North Side.

Safari, the only live sex theatre left in Germany is found in this street. Due to high crime rate and other problems there is a weapons ban in this area. A Beatles-Platz as a memorial of the time when the Beatles performed in this street has been built at the cross of Reeperbahn and Große Freiheit.

The name Reeperbahn comes from an old Low German (Plattdeutsch) word. In the seventeenth and eighteenth century, the street was a ropewalk where these ropes were produced for the nearby harbor.